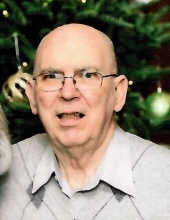 Glenn S. Henry, 77, of Manheim, passed away on Tuesday, December 15, 2020 at Pleasant View Retirement Community, Manheim. Born in Elizabethtown, he was the son of the late Abram and Anna Stauffer Henry. Glenn was the loving husband of Deena D. Cole Henry with whom he shared 46 years of marriage. Glenn graduated from Manheim Central High School, then worked in sales at the former Galen’s of Ephrata, Firestone, and J.C. Penny’s. He was a member of St. Paul’s Evangelical Lutheran Church, Lititz. Glenn was also a member of the Independent Order of Odd Fellows, Lititz. Glenn enjoyed collecting Winross trucks, playing computer games, working on projects around the house, watching sports, and spending time with his family.

Services are private and at the convenience of the family. Interment in Manheim Fairview Cemetery.
To order memorial trees or send flowers to the family in memory of Glenn S. Henry, please visit our flower store.