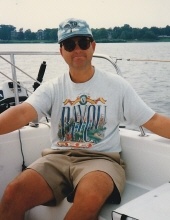 George Dewey Steedle III of Lititz, died on Tuesday, March 23, 2021 at Hospice & Community Care in Mount Joy following a cancer diagnosis in February. He was 67 years old. George was born at a Navy hospital in Norfolk, Virginia on October 7, 1953, the son of the late George Dewey Steedle, Jr. and Deloris Stephens Steedle, currently of New Holland.

He was the beloved father of two children, Nancy Steedle, wife of Michael Hackett, of Lancaster, and of Travis Steedle, husband of Kristen Steedle, also of Lancaster. He was a grandfather to three grandchildren, Safiya Hackett (11), Grace Hackett (6), and Dylan Steedle (3), who will miss playing with and teasing George very much. He is also survived by his sister, Diane (Steedle) Hertzler, wife of Robert Hertzler, currently of Sisters, Oregon.

George lived most of his life in Lititz, settling there in grade school when his father left the Navy and was hired as borough manager of Lititz. He graduated from Warwick High School in 1972 and then earned a Bachelor of Business Administration from Pennsylvania State University in 1976. He started his career in corporate sales of egg packaging to local egg producers and later regional sales of corrugated packaging. He always wanted to run his own business, though, and for the past 23 years, he was the CEO of Express Printing, a small printing business with locations over the years in Akron, Ephrata, and Columbia.

He loved sailing on the Delaware River and for many years he and his father kept a sailboat at the Riverton Yacht Club in New Jersey. He enjoyed studying military history and often visited historic sites in the region. He was a devoted and loving father and among his family, was a renowned teaser and always brought humor and fun to family gatherings.

His memorial service and interment will be private at the Lititz Moravian Church Memorial Garden.
To order memorial trees or send flowers to the family in memory of George D. Steedle III, please visit our flower store.