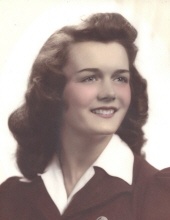 Genevieve M. “Jenny” Watson, 91, of Kleinfeltersville, went home to be with the Lord on Friday, October 16, 2020 at home. Born in York, she was the daughter of the late Otho G. and Dale V. Kline Miller. Jenny was the loving wife of Lt. Colonel James R. Watson who died in 1997. Jenny attended Washington Bible College. A homemaker, she also did modeling part-time in the Philadelphia area for Wannamaker’s and had a role in a dairy commercial. As a teenager, she learned to fly an airplane. She enjoyed traveling. Jenny’s Christian faith was important to her, and she taught Good News Clubs for Child Evangelism in numerous areas. She was also a member of the Daughters of the American Revolution. Jenny enjoyed painting and entertaining.