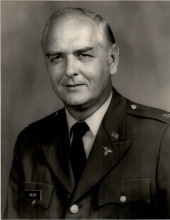 Fred L. Walter, 90, of Lititz, died peacefully surrounded by his family on Wednesday, February 26, 2020 at Landis Homes Retirement Community. Born in Tioga, he was the son of the late Russel B. and Carolyn Nearing Walter. He was a proud graduate of Penn State University with a Bachelor of Science degree in chemistry. Fred was the loving husband of the late Margaret E. Muth Walter who died in May of 2010. He had a lifetime career in the U.S. Army, a veteran of both Korea and Vietnam, he retired in 1982 with the rank of Colonel as the Chief of the U.S. Army Medical Service Corps. He was an active and faithful member of the Lititz Moravian Congregation and would volunteer by visiting the home bound members of the congregation and help with the candle making group of the church. His interests included: woodworking, gardening, where he became a certified master gardener, and participated in model railroading. Fred was a passionate enthusiast of everything Penn State and supported their programs and sports teams at every opportunity. Most of all he deeply cherished his family and enjoyed the times he could spend with his children and grandchildren.

Fred is survived by four children: David Walter of East Lampeter, Barbara J. Walter and Judy Walter both of Front Royal, VA and Bill Walter, husband of Kim Walter, of Fairfax, VA. He is also survived by daughter-in-law Pattie Walter, wife of his late son Fred Walter Jr. Fred had nine grandchildren, eight great grandchildren, and one great great grandson. Preceding him in death is his son, Fred L. Walter, Jr. his sister, Linda Nesbitt and his two brothers: Roland and Charles Walter.

Relatives and friends are respectfully invited to attend Fred’s celebration of life service at the Lititz Moravian Church, 8 Church Square, Lititz, on Saturday, March 7, 2020 at 11:15 AM. Friends may visit with the family immediately following the service at the church. Interment will be private and at the convenience of the family in Lititz Moravian Cemetery. In lieu of flowers contributions may be sent in Fred’s memory to: Wounded Warrior Project www.woundedwarriorproject.org/donate or the Lititz Moravian Church www.lititzmoravian.org.
To order memorial trees or send flowers to the family in memory of Fred L. Walter, please visit our flower store.