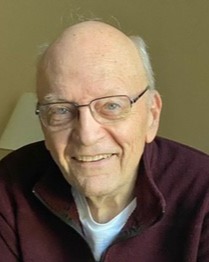 Frank Fitzgerald, 86, of Landisville, entered into the arms of his Lord & Savior, Saturday, December 24, 2022 at Lancaster General Hospital.  He was the loving husband of Jacqueline I. (Miller) Fitzgerald, and they were married 65 years.  Born in Lancaster, he was the son of the late Frank Sr. and Ruth E. (Rylee) Fitzgerald.  Frank proudly served in the US. Air Force for over 20 years as an environmental health technician, and then served as a Pennsylvania Health Inspector for 15 years before retiring.  Frank was a graduate of Hempfield High School, class of 1955 and received his B.A. from Park College, Missouri.  He was an active member of Lighthouse Assembly of God, New Holland, where he served a former church treasure and played trombone in the church worship team.  His hobbies included traveling and model railroading.

Relatives and friends are respectfully invited to attend his funeral service at Lighthouse Assembly church, 105 Earland Dr., New Holland, on Wednesday, December, 28, 2022 at 11:00 AM.  There will be a time of public viewing on Wednesday at the church from 10:00 AM until the time of the service.  Interment will be in Salunga Mennonite Cemetery.  Contributions in Frank’s memory may be sent to Lighthouse Assembly of God, Building Fund, 105 Earland Dr., New Holland PA 17557.
To order memorial trees or send flowers to the family in memory of Frank Fitzgerald, please visit our flower store.