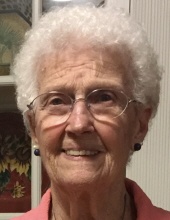 Florence D. “Flossie” Kershner, 91, of Lititz, died peacefully at home surrounded by her family on Sunday, August 18, 2019. Born in Maytown, she was the daughter of the late Howard N. and Florence Hershey Derstler. Flossie was the wife of the late Gerald L. Kershner who died in August of 2010. Flossie worked in the personnel department for Raybestos Manhattan, (Raymark Industries) in Manheim for over 30 years. She was a member of Lancaster Evangelical Free Church, Lititz, and served as a missionary with her husband with WEC International in the Middle East (Turkey) for three years. She and her husband also served for brief terms as missionaries in Canada, Guatemala, Japan, Peru, and Bosnia. Flossie continued to support missions by serving with Golden Years to help promote volunteerism among people in their retirement years who would consider missions. She was a life-long learner, spending time in her later years studying the Pennsylvania Dutch language. Flossie’s interests included: counted cross stitch, knitting and crocheting, and she made many sweaters, afghans, and donated many hats and blankets to the Lancaster General Hospital for infant care.

Relatives and friends are respectfully invited to attend Flossie’s funeral service at the Lancaster Evangelical Free Church, 419 Pierson Road, Lititz, on Sunday, August 25, 2019 at 4:00 PM. There will be a viewing at the church on Sunday afternoon from 3:00 PM until the time of the service. Interment will be private in Old Zion Cemetery, Warwick Township. Those desiring may send contributions in Flossie’s memory to New Wayv Ministries, 105 South Market Street, Suite 101, Elizabethtown, PA 17022.
To order memorial trees or send flowers to the family in memory of Florence D. "Flossie" Kershner, please visit our flower store.