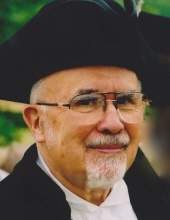 Eugene Franklin Hess, 91, formerly of Orwigsburg and Cressona, PA, went to be with his Lord and Savior, Monday, February 9, 2015 at the Masonic Village, Elizabethtown, where he had been a resident. Born in Elizabethtown, he was the son of the late Benjamin H. Sr. and Grace M. (Shank) Hess. He was the husband of Joyce Hinkel-Hess of Cressona, PA and formerly Pearl C. (Hetrick) Hess of Hanover. Eugene proudly served in the U.S. Navy during WW II. He was a student at Elizabethtown College when he enlisted in the Navy, and was called to active duty in 1943. After he was selected for officer training and assigned to Franklin & Marshall College, he was ordered to U.S.N.R. Midshipmen’s School at Columbia University in New York, where he was commissioned as a Navy Ensign. After the war, he returned to Elizabethtown College to finish his degree in Science and History, and then later became head of the Elizabethtown College Alumni Association, and one of the founders of the college’s Parent’s Council. He was employed at the former RCA plant in Lancaster where he was instrumental in the development of the color TV tube, receiving the “Golden Achievement Award” for team leadership and contributing three patented design changes. He later became owner of Schoenberg Leather Co. in Orwigsburg and was President of the PA Shoe and Leather Association in 1979. He was a member of the St. John’s United Church of Christ in Orwigsburg, where he was a Consistory Member, President of the Consistory in 1998, and served on the worship and music commission; and formerly a member of the Elizabethtown Church of the Brethren. Eugene enjoyed music, played the piano, was selected for the Elizabethtown College Quartet, and sang in church as well as in regional choirs, including the Reading Choral Society. He was also a member of Schuylkill Lodge #138 F&AM of Orwigsburg and Past Master of the Lodge in 1976-77; as well as a member of the Shriners, the Lion’s Club, and Blue Ridge Rifles Inc.

Relatives and friends are respectfully invited to attend his funeral service at the John S. Sell Memorial Chapel, 1 Masonic Drive, Elizabethtown, PA on Wednesday February 18, 2015 at 11:00 AM. Interment with military honors will be at Indiantown Gap National Cemetery at 2:30 PM. There will be a time of visitation with the family on Wednesday at Sell Chapel from 10:30 AM until the time of the service.

In lieu of flowers, contributions in Eugene’s memory may be made to the Masonic Tree of Life Fund, c/o Masonic Charities, Office of Gift Planning, 1 Masonic Drive, Elizabethtown, PA 17022.
To order memorial trees or send flowers to the family in memory of Eugene Franklin Hess, please visit our flower store.