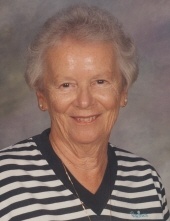 Edith Taylor who formerly lived in Manheim for nearly three decades died on Tuesday, February 26, 2019 at Lane Purcell Hospice House in Sumterville, Florida after a long battle with cancer. She was the late daughter of Jozef Hübl and Maria Hübl Leichtfried, and brother Rudolph (Rudy) Hübl. Edith was born in Vienna, Austria in 1926 where she grew up and graduated from Vienna District IX High School and University of Vienna, School of Commerce. In Vienna, she met and married Charles Standhardt, who later tragically died in a car accident when their son Milton (born in 1946) was very young. She lived in Italy for a while with Milton before coming to the United States in the early 1950s, where she worked as a secretary in Washington, D.C. for Dr. Werner Gabler, Swiss Business Counselor and met her late husband William Taylor who was attending George Washington University Law School at the time.
Edith became a naturalized citizen of the United States on November 18, 1960 while living in Lancaster where her husband Bill worked for Armstrong World Industries. The couple moved to Manheim shortly after their daughter Linda was born in 1963 and after Milton took a job in York working as a machine operator for International Union of Electrical Radio & Machine Workers, Local No. 124, AFL-CIO. Edith lived in Manheim through the mid-1960s, 1970s and early 1980s. She loved to play bridge, curling and golf and started a floral design business called Wise Design with her dear friend Marilyn Sanko (now Marilyn Ebel). After the death of her son Milton in a car accident in July, 1978 and then her husband Bill in May, 1981 she decided to retire in Florida in the mid-1980s where she could play golf year-round and where she later met and fell in love with her neighbor Gene Clarke. Edith and Gene enjoyed nearly 25 years together traveling around the world, playing golf, bridge, and spending time with friends and family until Gene passed away in September 2014. Edith continued to live in Florida for nearly five more years in the Waterman Village retirement community.

She is survived by her grandson Luc; her daughter Linda Gagner and husband David; her cousin Dr. Wolfgang Leichtfried and wife Brigitte; her granddaughter Kira Fairchild and husband Blaine, and great-grandsons Landen and Trentyn

Funeral services will be private and at the convenience of the family. Interment in Ruhl’s United Methodist Cemetery, Manheim.
To order memorial trees or send flowers to the family in memory of Edith Taylor, please visit our flower store.