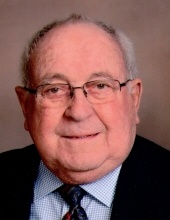 E. Eugene “Gene” Hummer, 87, of Manheim, died peacefully on Sunday, March 22, 2020, at the Lancaster General Hospital. Born in Penn Township, he was the son of the late Earl S. and Anna K. Cassel Hummer. Gene was the loving husband of Dorothy “Dottie” Swan Hummer, having recently observed their 5th wedding anniversary in February of this year. Gene was previously married to the late Jeane’ Kaylor Hummer who died in 2010, and his first wife of 43 years, the late Beatrice Reichenbach Hummer, who died in 1997. For over 40 years Gene was employed as a truck driver; first as an independent driver, and then employed for a number of Teamster’s Trucking Firms throughout Central Pennsylvania. He was a faithful member of Chiques United Methodist Church, Mount Joy. Gene’s other memberships included: Teamster’s Trucking Union # 771, Lancaster, Red Rose Snowmobile Club, PA State Snowmobile Association, and the Roby Hollow Rod and Gun Club in Tioga County. Gene loved the outdoors, hunting, fishing, and was a huge advocate for snowmobiling. His interests included: IndyCar Racing and the Indianapolis 500 Race and NASCAR Races, rooting for his favorite driver Jimmie Johnson, and watching the Little League World Series. Gene had a deep passion for his family, and cherished any opportunities to spend time with his children, grandchildren and great grandchildren.

Due to current public health guidelines, services for Gene will be private. Interment will be in East Fairview Church of the Brethren Cemetery, Manheim.
To order memorial trees or send flowers to the family in memory of E. Eugene "Gene" Hummer, please visit our flower store.