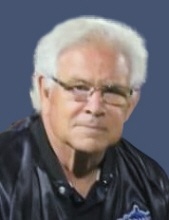 Dwight William Bomberger, age 77, of Manheim, went to be with his Lord and Savior on Wednesday, April 14, 2021 at UPMC Lititz, surrounded by his loving family. He is survived by his loving wife Patricia Graham Bomberger, with whom he would have celebrated 53 years of marriage on June 8, 2021. Born in Manheim, he was the son of the late Paul D. and Ruth Smith Bomberger.

A 1962 graduate of Manheim Central High School, Dwight lettered in track and field, football and starred in wrestling; where he was a two-time Lancaster County Champ, District III and Regional Champ, and state qualifier.

Following graduation, he attended East Stroudsburg State College and graduated with a BS Degree in Health Education (‘66), and ME Degree in Health and Physical Education (‘68). During his tenure he was a member of the Tau Kappa Epsilon Fraternity as well as letter and medal winner on the wrestling team.

For 25 years Dwight taught Health and Physical Education at Hempfield High School, Landisville, the last 15 years as Chairperson and Supervisor of the Department. He also was the head wrestling coach and assistant track coach. He coached county, district, and regional champs, and numerous state qualifiers along with two Christmas Tournament Team titles, as well as served as President of the District III Wrestling Coaches Association.

Dwight was known for his passion for teaching and for his profession. He was a cooperating teacher for student teachers from various institutions, wrote numerous journal articles, co-director of the Red Cross HIV-AIDS video, president of the Lancaster/Lebanon County Health & Physical Education Association and adjunct instructor of Wellness at Millersville University.

Dwight was recognized as the PA Secondary Physical Education Teacher of the Year 1994/95 by the National Association for Sport and Physical Education. He was the recipient of the Lancaster/Lebanon County Arnold Zink Award for service and vision and recipient of the Professional Honor Award by the PSAHPED for his service. He holds lifetime membership in the PSEA, NEA, PSAHPERD.

Dwight was a faithful member of the St. Mark’s United Methodist Church Mount Joy, for 46 years. He served faithfully in various ministries throughout his tenure including: being a pioneer in the free community meals, a Friendship Sunday School class member, finance committee, children’s message time, lay reader, usher and greeter.

He was a member of the Hershey Coin Club. He was the announcer for three years for the Manheim Central High School Varsity Baseball Team.

Dwight’s love for music was realized as a performer for the World Champion Reading Buccaneers Drum and Bugle Corps based out of Reading PA. He performed competitively in the color guard and honor guard, receiving numerous awards as a “Most Inspirational Member” and was inducted into the “Hall of Fame” in 2012. Most recently, he marched with the Reading Buccaneers Alumni Drum and Bugle Corps.

Preceding him in death are a daughter-in-law Nicole Schneider Bomberger and a brother-in-law, Richard Good.

Services of Celebration and Remembrance for Dwight William Bomberger, 77, of Manheim, who died on April 14, 2021 will take place at St. Mark’s United Methodist Church, 37 East Main Street, Mount Joy, on Saturday, April 30, 2022 at 2:00 PM. Friends may visit with the family at the church on Saturday afternoon from 1:00 PM until the time of the service. (Please use main entrance at rear of the church building.) You may also view Dwight’s service on-line please go to: Connectstmarks.com/dwight. A private graveside service will be held at the convenience of the family.