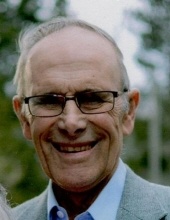 Donald Lee Hershey, 84 of Manheim, PA moved from his earthly home to his heavenly home on May 31, 2021. He was the son of the late M. Rohrer and Ruth Zimmerman Hershey, raised in Manheim Township and graduated from Lancaster Mennonite class of 1955.
He shared 63 years of marriage with his sweetheart Geraldine Marie Snavely Hershey. After marriage, Don and Gerry entered the dairy farming business which became known as Hershvale Farms. The main emphasis in the early years was developing a herd of registered Holstein dairy cows. He donated time by serving on many Ag related boards.

Although a busy farmer Don found time for some other things. His biggest interest was serving the Lord in church work, most recently as a member of Lebanon Valley Bible Church. Don began teaching Sunday school at age 18 and occasionally until age 80. He loved to do volunteer work which included driving ambulance for Manheim EMS.

After turning Hershvale Farms to his son, Larry, he continued working on the farm, as well as Manheim Auto Auction. Later he did guided tours for Kreider Dairy Farms and worked at Jubilee Ministries, Manheim.

Don loved and prayed for his family. In addition to his wife, he is survived by two sons, Larry Hershey husband of Bonnie, Manheim and Stephen Hershey husband of Heidi, Mount Joy and a daughter Patti Ritchey, Holtwood. Don and Gerry were blessed with six grandchildren and five great grandchildren. He is also survived by sister Kathryn Yost, LaGrange, KY and brother James Hershey, York. He was preceded in death by son-in-law David Ritchey.

Relatives and friends are respectfully invited to attend his funeral service at Lebanon Valley Bible Church, 1482 Horseshoe Pike, Lebanon on Monday, June 7, 2021 at 11:00 AM. There will be a public viewing at the church from 9:30 AM until the time of service. Interment in Hernley Mennonite Cemetery, Manheim. In lieu of flowers, those desiring may send contributions in Donald’s memory to Lebanon Valley Bible Church, Missionary Fund, 1482 Horseshoe Pike, Lebanon, PA 17042 or Heifer International, 1 World Avenue, Little Rock, AR 72202.
To order memorial trees or send flowers to the family in memory of Donald Lee Hershey, please visit our flower store.