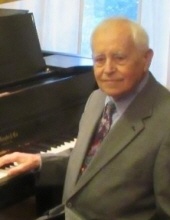 David W. Shickley, 94, of Columbia, went to be with his Lord & Savior, Wednesday, January 12, 2022, at Paramount Senior Living, Maytown. He was the widower of the late Martha Sawadsky who died in 2004. Born in Philadelphia he was the son of the late Nelson and Florence (Weidman) Shickley. Prior to his retirement, David worked as an office administrator for Turkey Hill Industries, Conestoga, and the former Donegal Steel, Marietta. David and his wife Martha were proud foster parents for 69 children over 31 years. David was a graduate of Columbia High School and studied music for 6 years at the former Wolf Institute of Music, Lancaster. He was a member and former pianist at Grace Baptist Church, Lancaster. Additionally, he was the piano player for Bob Neff and Youth for Christ. He wrote, composed and published many pieces of music as well. David also taught piano and trumpet lessons for many years.

Surviving are two sons, Charles, husband of Angela Adams, Mountville, John C. Adams, Shomong, NJ; and a grandson Connor Adams. In addition to his wife and parents he was preceded in death by a brother Nelson Shickley, and two sisters, Eleanor Jackson and Ruth Goodhart.

Relatives and friends are respectfully invited to attend David’s funeral service at Grace Baptist Church, 1899 Marietta Avenue, Lancaster, on Tuesday, January 18, 2022, at 2:00 PM. There will be a time of viewing and visitation with the family on Tuesday at the church from 1:00 PM until the time of the service. Kindly omit flowers, contributions in David’s memory may be sent to Grace Baptist Church, Mission Fund, at the above-mentioned address.
To order memorial trees or send flowers to the family in memory of David W. Shickley, please visit our flower store.