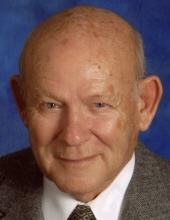 Dale E. Shelley, 94, of Lititz, beloved husband, father, grandfather, brother, died peacefully on Saturday, March 26, 2022 surrounded by his loving family. Born in Middletown, he was the son of the late Archie and Bertha Doup Shelley. When immigrating to America and arriving on Ellis Island his grandfather changed his last name from “Schillig” to “Shelley” and moved to an island on the Susquehanna River, “Shelley Island”.

Dale lived in Lebanon and Lancaster and moved to Lititz when he was four. He was the seventh of twelve children, graduating from Lititz High School in 1945, where he was Student Council President, Editor-in-Chief of the school newspaper and Co-Captain of the basketball team. When his family moved to Warwick Township, he and his brother, Ray moved in with Glenn and Mildred McElroy of McElroy’s Pharmacy, where he began his career as a “soda jerk”.

The draft for World War II saw him placed on hold due to the family’s having four sons already in the service. He worked his way through Temple University Pharmacy School, graduating in 1953 where he met his future wife, June M. Witmer and was married that same year. They would have celebrated 69 years of marriage on July 12 of this year.

Dale was called up for military service during the Korean War in 1953, and after basic training he began his career as a pharmacist at Walter Reed Army Hospital in Washington D.C. where his wife, June, also worked until their first son was born in 1955. He was then employed at McElroy’s Pharmacy and later became owner from 1976 until retirement in 1991.

Dale was a member of the American Business Club in Lititz for 52 years and served as president. He served as volunteer transport personnel for the first Warwick Community Ambulance and the Warwick Ambulance Drivers Association, founded in 1956 by the American Business Club of Lititz. He helped start the AMBUCS annual productions of the “home- written shows” – in twenty-five years he wrote, directed and constructed scenery for seven home productions including titles like “Going Buggy”, and he directed eighteen AMBUCS Broadway shows.

He was on the Linden Hall School for Girls Board of Trustees and was Chairman of the 250th Celebration of Linden Hall. He was a member of the Wall of Remembrance Committee in the Lititz Springs Park and recently completed the associated book. He wrote three historical productions telling the story of Lititz. Dale served on Lititz Borough Council and on the Board of the Lititz Community Center. In 1975 he worked with Bob Derck and Dan Graybill, writing and directing the 250th Celebration of America—thirty-six outdoor light and sound productions on Church Square entitled, “If These Walls Could Speak”.

In his younger years Dale enjoyed cross-country skiing and a good game of tennis. Throughout his life he enjoyed painting, making amazing homemade chocolate candy, the camaraderie of playing golf, bridge and pinochle with friends, and large family reunions, though history clearly captured most of his attention and creative energies.

To order memorial trees or send flowers to the family in memory of Dale E. Shelley, please visit our flower store.