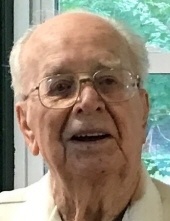 Cleve Montgomery, 103, of Manheim, died Tuesday, June 1, 2021 at his residence. Born in Sylvatus, VA, he was the son of the late Hosie and Josie Montgomery. He was the husband of the late Margaret (McGee) Montgomery who died in 1987. Cleve had worked at the former Raybestos Manufacturing of Manheim for over 35 years before retiring. Cleve proudly served in the U.S. Army during WW II. He enjoyed fishing and camping, but his greatest pleasure was spending time with his family, especially with his great-grandchildren.

Surviving is a son Robert A. husband of Rebecca (Keener) Montgomery, Manheim; a daughter Phyllis Shiley, Mount Joy; 14 grandchildren; and numerous great- grandchildren and great-great grandchildren. In addition to parents and wife he was preceded in death by a daughter Joanne Clawson; a son William “Bill” Ober; a sister Doris Jean Marshall; and five brothers Troy, Truman, Wilbur, Arnold, and Harley Lee Montgomery.

Relatives and friends are respectfully invited to attend his funeral service at the Buch Funeral Home, 21 Market Square, Manheim, on Monday, June 7, 2021 at 10:00 AM. Interment with Military Honors will be in Ruhl’s United Methodist Cemetery. There will be a time of viewing and visitation with the family on Monday at the funeral home from 9:30 AM until the time of the service.
To order memorial trees or send flowers to the family in memory of Cleve Montgomery, please visit our flower store.