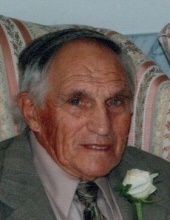 Clarence S. Siegrist, formerly of Neffsville, passed away at The Mennonite Home, Lancaster, in his 98th year on August 20, 2019. He was a resident at the home since January 31, 2019. Born in East Hempfield Township on December 20, 1921 to the late Clarence F. and Mattie Stauffer Siegrist. He was the husband of the late Jane M. (Denlinger) Siegrist who passed away May 2, 2014. They celebrated their 70th anniversary on June 12, 2013.

Clarence farmed in Neffsville for 30 yrs. He drove school bus for Manheim Township Schools for 45 yrs. beginning in 1962, and retiring in 2007 at age 87. He enjoyed driving bus and the elementary students called him pop or pappy when they were asked who drove their bus. He also worked 35 yrs. as a custodian at Manheim Township Schools and retired as the lead custodian at the Middle School. He also did custodial work at East Petersburg Mennonite church for six years.

Clarence was a life time member at the East Petersburg Mennonite Church. He remembers pastors and choristers from the late 1920’s to the present day at the church.

Clarence loved to garden and listen to music. He also enjoyed flowers and watching birds in his later years. He always wanted to make sure the plants were watered and the birds had suet. He loved the summertime heat and liked his tractors. Clarence could always tell anyone a good story from his days working in Manheim Township Schools, from driving school bus, from his farming days, and from the hammermill outfit he operated during his late teen years.

Preceding him in death is a sister, Rachel A. Becker, two brothers: Burnell S. and Mark S. Siegrist, and a great granddaughter, Charlotte Hasircoglu. He was the last surviving member of his family.