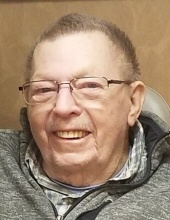 Charles J. “Charlie” Martin, 81, of East Petersburg, passed away peacefully on Friday, June 5, 2020 at Ephrata Manor. Born in Lancaster, he was the son of the late Abel and Anna Mary Hufford Martin. He was the loving husband of the late Joanne G. Wise Martin who died in 2015. Charlie retired as a mechanic supervisor at the former Victor Weaver, Inc, New Holland. Following retirement, Charlie owned and operated the former East Petersburg Family Restaurant and the former Dutch Kountry Kitchen, Manheim. He attended Heritage Baptist Church, Manheim and was a former member of the Country Chapel Singers. His interests included riding motorcycles, traveling to Florida, board games, playing his guitar and he loved to spend time with his family.

Funeral services are private and at the convenience of the family. Interment in Voganville Union Cemetery.
To order memorial trees or send flowers to the family in memory of Charles J. "Charlie" Martin, please visit our flower store.