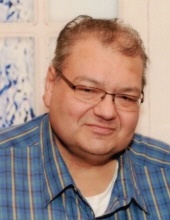 Charles “Chuckie” Ortega, 63, of Lititz, died peacefully on Friday, February 21, 2020 at the Lancaster General Hospital. Born in Lancaster, he was the son of Yvonne M. Thomas Ortega Frey of Elizabethtown, and the late Paul Ortega; and the stepson of the late Leroy Frey. Charles was the loving husband of Bonnie M. Retallack Ortega and they observed their 41st wedding anniversary in September of last year. For over 43 years Chuckie worked as a welder for High Steel Structures in Lancaster retiring in 2017 when he took up a fulltime job of being the best Grandpa anyone could want. He attended Trinity Evangelical Congregational Church, Lititz. His interests included: hunting, fishing, and family camping trips. In his younger years he spent much of his time in Clearfield County. He loved the mountains, which was his get away and sanctuary. He rooted for his Philadelphia Eagles and was proud to be an avid fan. Most of all he loved his family and had a life-long passion for his wife, children, and grandchildren.

Relatives and friends are respectfully invited to attend Chuckie’s funeral service at the Trinity Evangelical Congregational Church, 44 East Orange Street, Lititz, on Friday, February 28, 2020 at 11:00 AM. There will be a viewing at the church on Friday morning from 10:00 AM until the time of the service. Interment will be in Trinity Evangelical Cemetery, Bomberger Road, Lititz. In lieu of flowers, contributions may be sent in Chuckie’s memory to the Trinity Evangelical Congregational Church Building Fund, 44 East Orange Street, P.O. Box 211, Lititz, PA 17543.
To order memorial trees or send flowers to the family in memory of Charles "Chuckie" Ortega, please visit our flower store.