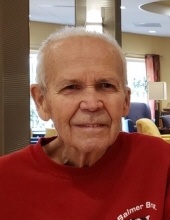 Carl S. Ritter, 86, of Manheim, and formerly of Brunnerville, died peacefully on Sunday, March 20, 2022 at Luther Acres, Lititz. Born in Brunnerville, he was the son of the late Paul B. and Bertha Schaeffer Ritter. Carl was the loving husband of Doris E. Warner Ritter and they observed their 57th wedding anniversary in December of last year. His first wife was the late Alicia Rudy Ritter who died in 1961. Carl worked as a laborer and truck driver for Atlantic Breeders Cooperative, Lancaster, and Nolt’s Ponds, Silver Spring; following retirement he worked part time for the Manheim Auto Auction. He was an active and faithful member of Zion Evangelical Lutheran Church, Manheim. Carl’s interests included: gardening, hunting, traveling through the U.S., and spending time at Ocean City, New Jersey.

Surviving in addition to his wife, Doris, are two sons: Kevin M. Ritter husband of Richard A. Zimmer of Fairlawn, N.J., Brett E. husband of Kristen H. Ritter of Manheim, a daughter, Gretchen L. wife of John B. Leibley of Manheim, three grandchildren: Emily, Alex, and Luke. Preceding him in death is a sister, Marion E. Palmer.

The family would like to extend their thanks and gratitude to the nursing staff at Luther Acres Lititz, for the compassionate care given to Carl during his illness.

Relatives and friends are respectfully invited to attend Carl’s funeral service from the Buch Funeral Home, 216 South Broad Street, Lititz, on Saturday, March 26, 2022 at 10:00 AM. There will be a viewing at the funeral home on Saturday morning from 9:00 AM until the time of the service. In lieu of flowers, contributions may be made in Carl’s memory to: Hospice and Community Care, P.O. Box 4125, Lancaster, PA 17604-4125. Interment will be in St. Joseph’s New Catholic Cemetery, Lancaster.

To order memorial trees or send flowers to the family in memory of Carl S. Ritter, please visit our flower store.