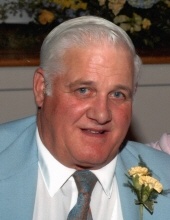 Carl B. Snyder, 87, of Lititz, died peacefully on Monday, October 12, 2020 at Brethren Village. Born in Lancaster, he was the son of the late Warren B. and Kathryn Brackbill Snyder. Carl was the loving husband of Sylvia Snyder and they would have observed their 68th wedding anniversary in November of this year. He was a proud third generation owner and operator of Snyder’s Fruit Farm, in Warwick Township. Carl was a member of Trinity Evangelical Congregational Church, Lititz. From 1982 to 1999 Carl and his son, Darrell formed the Eastern Produce Softball League which used two of the playing fields on their farm. Carl was a lifetime stand holder at Root’s Market where many of his family worked alongside him, at the family Snyder Fruit Stand. He also had a deep love for all animals.

Surviving in addition to his wife, are four daughters: Judy K. wife of B. Frank Yunginger Jr., of East Petersburg, Deborah A. wife of Perry Gress, of Ephrata, Sherry C. wife of Scott Jurell, of Mertztown, Janet C. wife of Tom Allshouse, of Lititz, a son, Darrell E. husband of Suzanne Snyder, of Lititz, 15 grandchildren, 17 great grandchildren, a brother, Donald husband of Nancy Snyder, and a sister, Sylvia wife of William DeLong III, all of Lititz.

Services for Carl will be private and at the convenience of the family. Interment will be in Machpelah Cemetery, Lititz.
To order memorial trees or send flowers to the family in memory of Carl B. Snyder, please visit our flower store.