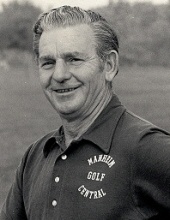 After serving as a signalman in the Navy during World War ll, Byron graduated from West Chester State Teachers College where he met his future wife Joan on the very first day of classes. He became a Health and Physical Education teacher in the Manheim Central School District in 1954, starting the school district’s golf program in 1965 and coaching multiple sports over his career for the district. He returned to West Chester to earn his Master’s Degree in 1969. Byron retired from the district in 1982. Byron was especially proud and humbled by a former student who credited Byron for inspiring him to become a Health and Physical Education teacher himself. He nominated Byron for the Project Inspiration Award. This meant that Byron’s name would be placed on a plaque by the National Association for Sport and Physical Education and be on permanent display in Logan, W. VA. Byron was also elected to the Manheim Central Hall of Fame in 2008. Byron was an active and faithful member of Salem United Methodist Church in Manheim, where he served through the years as an usher, driver, and Sunday School teacher.

Byron will be remembered for his ebullient sense of humor, love of family, eagerness to tell stories, and invaluable golfing advice.

A private graveside ceremony will be held at the convenience of the family. In lieu of flowers, contributions in Byron’s memory may be made to the Manheim Central Foundation For Educational Enrichment, P.O. Box 475, Manheim, PA 17545.
To order memorial trees or send flowers to the family in memory of Byron Walter Sprock, please visit our flower store.