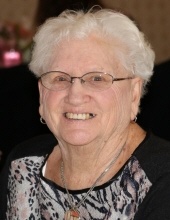 Bernice N. Miller, 85, of Landisville, died unexpectedly after a brief illness, on Tuesday April 13, 2021 at Lancaster General Hospital. She was the widow of Richard A. Miller who died in 2002. Born in Manor Twp. she was the daughter of the late J. Vernon and Hazel (Barley) Newcomer. Bernice had worked in a clerical position for Armstrong World Industries and the former Hamilton Watch Co. both of Lancaster. Bernice was a faithful member of Hempfield Church of the Brethren, Manheim. Her “green thumb” was evident in the beautiful flower gardens she had. But her greatest joy was spending time with her family and circle of friends.

Relatives and friends are respectfully invited to attend her memorial service at Hempfield Church of the Brethren, 1186 Stevens St., Manheim, on Saturday, April 24, 2021 at 11:00 AM. There will be a time of visitation with the family immediately following the service. Interment in Masonville Cemetery, Millersville, will be private. In lieu of flowers, contributions in Bernice’s memory may be sent to Hempfield Church of the Brethren, P.O. Box 246, East Petersburg PA 17520
To order memorial trees or send flowers to the family in memory of Bernice N. Miller, please visit our flower store.

Hempfield Church of the Brethren

Hempfield Church of the Brethren