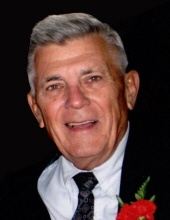 Barry L. Henry, 84 of Landisville, and formerly of Manheim, died peacefully surrounded by his family on Tuesday, May 21, 2019 at Hospice & Community Care, Mount Joy. Born in Manheim, he was the son of the late Charles W. and Mary Hunchberger Henry and the stepson of the late Sara L. Achey Henry. He was the loving husband of the late Shirley A. Galebach Henry who died in February of 2009 following 50 years of marriage.
Barry graduated from Manheim Central High School in 1953, where he was a member of the football, baseball, and basketball teams and received the Best Athlete award in his senior year. At Manheim Central he was Sports Editor for the School Newspaper and selected for the lead of his senior play. Barry received his Bachelor’s Degree in Mathematics Education from Millersville State Teachers College in 1957 and later earned his Master’s Degree in Mathematics in 1970. He was a member of the basketball and baseball teams while attending Millersville. During his Junior Year at Millersville he also coached the Junior Varsity Basketball Team. In 1973 he received his Principal's Certificate from Temple University. Barry was a teacher at the Pequea Valley High School and Head Basketball Coach from 1957 to 1959. From 1953 to 1962 Barry played semi-pro baseball in Lancaster County with impressive pitching records of 14-1 for Manheim in 1954 and 13-1 for Lititz in 1958. From 1959 to 1973 he was the head coach for Hempfield High School’s Basketball Team leading them to several County and District Championships. Barry also won the Lancaster County Coach of the Year in 1961 and 1962. He was a teacher at Hempfield High School where he taught Computer and Math from 1959 to 1975. For 18 years, from 1975 to 1993, Barry served as a Hempfield School District Administrator at Centerville Middle School. He was an elected member of the following Halls of Fame: Millersville University Sports Hall of Fame, Susquehanna Valley Chapter Sports Hall of Fame, 2008, Lancaster County Sports Hall of Fame, 2013, Manheim Central Hall of Fame, 2014, and the Hempfield Sports Hall of Fame. He served as a member of the committee for the Lancaster County and Hempfield Sports Hall of Fame. Barry spent his life being passionate about sports and instilling leadership and sportsmanship in others while being a coach for youth of all ages throughout his career.
Barry was a member of Landisville Church of God where he served as a council member, a director of the Agape Youth Center and a member of the Seasoned Saints. He was a former member and President of the Manheim Jaycees.

In his retirement Barry spent his time driving for Brighter Day Foundation, Lancaster, a Christian non-profit organization that provided transportation for those in need. He enjoyed wood carving, and loved the game of golf and the friendship of those he played with.
The family would like to thank Hospice and Community Care, Home Instead Senior Care, Dr. Lando, and Dr. Reddy and the Blue Team from the Ann B. Barshinger Cancer Institute, Lancaster, for their compassionate care given to Barry during his illness.
Surviving are three daughters: Anne M. wife of Steve Burridge of Lititz, Lynne R. Kendig of Elizabethtown, and Jill wife of Eric Schopf of Stewartstown, 7 grandchildren: David Jason Kendig, Shane husband of Rachel Burridge, Joshua Kendig, Alana Kendig, Amanda Burridge, Kirstin Schopf, Lance Schopf, and three great grandchildren: Juliana Kendig, Sadie Grace Burridge, Cayden Leroy Burridge, a brother, Spencer L. husband of Doris Henry of Brownstown, a sister, Elsieanna Henry of Shamong, New Jersey and a sister-in-law, Kathryn Galebach wife of Donald Reigle. Preceding him in death is a brother, Charles W. Henry Jr.
Relatives and friends are respectfully invited to attend Barry’s Celebration of Life Service at the Church of God of Landisville, 171 Church Street, Landisville, on Saturday, June 1, 2019 at 11:00 AM with Pastors: Tim Bistline, Barry Sellers, and David Henry officiating. A reception will be held in the MPR room at the church after the service at which time friends may greet the family. Interment will be private and at the convenience of the family. In lieu of flowers, gifts of remembrance of Barry’s life may be made to Hospice and Community Care, P. O. Box 4125, Lancaster, PA 17604-4125, or Church of God of Landisville, Seasoned Saints, 171 Church Street, Landisville, PA 17538.
To order memorial trees or send flowers to the family in memory of Barry L. Henry, please visit our flower store.

Church of God of Landisville