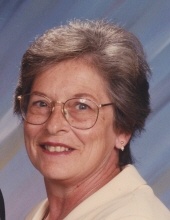 Barbara Jean Theis, 74, of Mount Joy, died unexpectedly, Saturday September 19, 2020 at her residence. She was the widow of John W. Theis who died in 2013. Born in Conoy Twp. She was the daughter of the late Leroy and Anna (Sager) Sweigart. Barb was a wonderful homemaker for her husband and family, but also enjoyed working at the candy counter at the former Watt & Shand Dept. Store in Lancaster, and she also worked as a dental assistant in Centerville. Known for her warmth and sense of humor, Barb was also an excellent cook and baker, enjoyed counter cross stitch, and had a green thumb. She also enjoyed the company of her cat Sofie, but Barb’s greatest joy was being a wife, mother, and grandmother.

In keeping with Barbara’s wishes, her service will be private. Memorial contributions in Barbara’s memory may be sent to Humane League of Lancaster County, 2195 Lincoln Highway East, Lancaster PA 17602.
To order memorial trees or send flowers to the family in memory of Barbara Jean Theis, please visit our flower store.