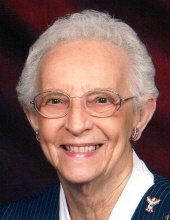 
Anna Mary Peters, 96, formerly of Manheim, passed away on Thursday, March 24, 2022, at United Zion Retirement Community, Lititz. Born in Manheim, she was the daughter of the late Oscar H. and Naomi Young Ruhl. She was the loving wife of the late Cyrus R. “Pete” Peters who died in 2015. Retired in 1985, Anna Mary was an Administrative Secretary at the former Raymark Industries for 34 years and received the community service award in 1981. In 2008, Anna Mary and her husband Pete were co-recipients of the Sertoma Service to Mankind Award and in 2014, she was inducted into the Manheim Central Hall of Fame. Anna Mary was a member of St. Paul’s United Church of Christ, Manheim. Anna Mary was an active and faithful member of the Manheim VFW Post 5956 Ladies Auxiliary where she served as President for 14 years. She served with the Lancaster County Council VFW Auxiliary, Patriotic Instructor District 9, and as chairman of the Department of Pennsylvania VFW Auxiliary. Anna Mary was also a member of the Manheim Historical Society and American Business Women’s Association.

Relatives and friends are respectfully invited to attend her funeral service at the Buch Funeral Home, 21 Market Square, Manheim, on Friday, April 1, 2022, at 11:00 AM. There will be a viewing at the funeral home on Friday morning from 10:00 AM until the time of service. Interment in Manheim Fairview Cemetery. In lieu of flowers, those desiring may send contributions in Anna Mary’s memory to United Zion Retirement Community Caring Fund, 722 Furnace Hills Pike, Lititz, PA 17543.

To order memorial trees or send flowers to the family in memory of Anna Mary Peters, please visit our flower store.