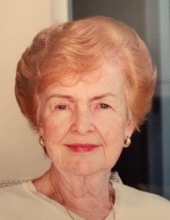 Alice Bernhard Thompson, 95, of Lancaster and formerly of Lake Wylie, SC and Manheim, passed away on Friday, December 13, 2019, at Hospice and Community Care, Mount Joy. Born in Brooklyn, NY, she was the daughter of the late Arthur and Lilly Raastad Andreasen. Alice was the wife of the late Gene Thompson, who died in May of 2011. Her first husband was the late Charles G. Bernhard who died in November of 1975. In her early years, Alice worked at the Standard Oil Corporation in New York City, Chase Bank, also in New York City, RCA in Lancaster and the Manheim Belting Company. She enjoyed her experience working as an extra in the movie “Witness,” which was filmed in Lancaster County. Alice devoted her time volunteering in the Carolinas, including at a women’s shelter in the Charlotte area. Her interests included traveling, oil painting, history, reading and nature. She had a strong faith and was a former member at Christ Covenant Church in Matthews, NC and Zion Lutheran Church in Manheim. Alice had a deep devotion to her family and treasured the time she spent with both family and friends.

Relatives and friends are invited to attend Alice’s memorial service at Woodcrest Villa at the Eagle Wing Commons, 2001 Harrisburg Pike, Lancaster, on Friday, December 20, 2019, at 11:00 a.m. Friends may visit with the family on Friday morning in the Eagle Wing Commons from 10:00 a.m. – 11:00 a.m. Interment will be at Manheim Fairview Cemetery.
To order memorial trees or send flowers to the family in memory of Alice Bernhard Thompson, please visit our flower store.