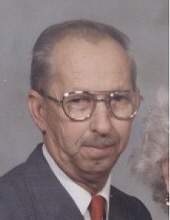 William J. “Pappy” Estep Jr., 90, formerly of Mapledale Road, Elizabethtown, passed away on Thursday, April 13, 2017. Born in Mount Jackson, Shenandoah County, Virginia, he was the son of the late William J. and Dora Lindamood Estep. He was the loving husband of the late Mary Flory Estep who died on November 23, 2016. Retired in 1992, Bill worked for 31 years at M&M Mars, Elizabethtown. He was a member of Temple Bible Church, Elizabethtown. His interests included vegetable gardening, woodworking and he enjoyed being a handy man.

Relatives and friends are respectfully invited to attend his funeral service at Temple Bible Church, 5880 Schoolhouse Road, Elizabethtown on Saturday, April 22, 2017 at 11:00 AM. There will be a public viewing from 10:00 AM until the time of service. Interment in Shenks Community Cemetery. In lieu of flowers, those desiring may send contributions in Bill’s memory to Hospice & Community Care, P.O. Box 4125, Lancaster, PA 17604-4125.
To order memorial trees or send flowers to the family in memory of William J. Estep Jr., please visit our flower store.