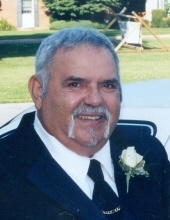 William D. “Bill” Bonanno, 74, of Manheim passed away at home on Tuesday, April 1, 2014. Born in Altoona, he was the son of the late Antonio and Dominica Panzarotto Bonanno. He was the loving husband of Thelma Markley Bonanno and they would have celebrated their 38th wedding anniversary in June. Bill retired after thirty-three years from Alcoa, Lancaster. He graduated from Altoona High School. Bill was an active and faithful member of Salem United Methodist Church, Manheim and he proudly served in the United States Army National Guard. He was a life member of Elstonville Sportsmen Association, Manheim and he was involved in local politics. Bill enjoyed hunting and fishing. He loved to spend time with his family; especially his grandchildren.

Surviving in addition to his wife are six children, William F. Bonanno of Marietta, Annette wife of Eric Cook of Mountville, Matthew husband of Patricia Rineer of Lancaster, Adam husband of Carrie Bonanno of Manheim, Nadine wife of Stephen Tyer of Lititz, Katie wife of Thomas Dennes of Parkesburg, fifteen grandchildren, one great grandson due in August and a sister, Pauline Hemond of Altoona. He was preceded in death by a sister, Anna Trullender and three brothers, Tony, Peter and Joseph Bonanno.

Relatives and friends are respectfully invited to attend his funeral service at Salem United Methodist Church, 140 North Penn Street, Manheim on Friday, April 4, 2014 at 11:00 AM. Interment will be private in Fairview Cemetery, Wrightsville. There will be a public viewing at the church on Friday morning from 10:00 AM until the time of service.

To order memorial trees or send flowers to the family in memory of William D. "Bill" Bonanno, please visit our flower store.