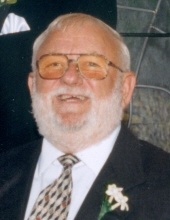 Thomas J. “Tom” Krupa, 85, of Manheim passed away at home on Sunday, May 29, 2016. Born in Delair, New Jersey, he was the son of the late John and Catherine Ramsz Krupa.
He was the loving husband of Mary Allen Krupa and they would have celebrated their 64th wedding anniversary in July. A retired Physicist and Engineer, Tom retired from Hamilton Tech., Lancaster. He received a Master of Science degree from Drexel University and attended the University of Maryland, George Washington and San Francisco with an undergraduate in Math and History. Tom proudly served in the United States Air Force for over twenty years and as a Master Sergeant during the Vietnam War. He enjoyed researching historical events and he published a book in 2014, Biblical Flood.

Relatives and friends are respectfully invited to attend his funeral service at the Buch Funeral Home, 21 Market Square, Manheim on Thursday, June 2, 2016 at 11:00 AM. There will be a public viewing from 10:00 AM until the time of service. Interment in Manheim Fairview Cemetery, Penn Township. In lieu of flowers. Memorials may be made in Tom’s memory to American Diabetes Association, 150 Monument Road, Suite 100, Bala Cynwyd, PA 19004.
To order memorial trees or send flowers to the family in memory of Thomas J. "Tom" Krupa, please visit our flower store.