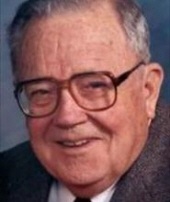 Born in Manheim, he was the son of the late Raymond W. and Emma A. Hess Hollinger. For over thirty-five years Ted was a partner with his brother of the former R. W. Hollinger and Sons Building Supply Company in Manheim. He served in the U.S. Air Force during World War II. Ted was the loving husband of Anna Mae Miller Hollinger and they would have observed their 65th wedding anniversary in November of this year. Ted was an active and faithful member of St. Pauls United Church Of Christ, Manheim, and served as a deacon on the consistory. Other memberships included: the Manheim Historical Society, the Hope Fire Engine and Hose Company Number One of Manheim, and the Manheim American Legion Post 519. Teds interests included: flower gardening, and he was known for his expert craftsman skills in carving of wood decoy ducks and shore birds.

Surviving in addition to his wife, are two sons: Michael L. husband of Beverly Graybill Hollinger of Manheim, Bruce A. Hollinger of Lititz, two grandchildren: Douglas and Jennifer, four great grandchildren, and a sister, Virginia Graybill of Landisville. Preceding him in death is a brother, Eugene H. Hollinger.
Relatives and friends are respectfully invited to attend his memorial service from the Hoffer Auditorium at Pleasant View Retirement Community, 544 North Penryn Road, Manheim, on Tuesday, September 7, 2010 at 7:00 PM with Pastor William J. LaSalle officiating. The family invites everyone to attend the service with casual attire. Interment will be private in St. Pauls United Church Of Christ Memorial Garden. Friends may visit with the family immediately following the memorial service at the Hoffer Auditorium. Please omit flowers. Those desiring may send contributions in Teds memory to St. Pauls United Church Of Christ, Memorial Fund P. O. Box 129 Manheim, PA 17545
To order memorial trees or send flowers to the family in memory of Theodore H. "Teedy" Hollinger, please visit our flower store.