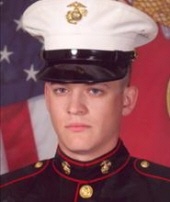 Michael Anthony Conant, 26, of Harrisburg, died unexpectedly Wednesday February 1, 2012 at his residence. Born in Lancaster he was the son of David A. Conant (Fianc"e of Angela Vega both of Marietta) and the late Bethel (Irvin) Conant Baker who died in 2003. Michael was employed at Morefield Communications of Camp Hill as Team Leader, Network Services. He proudly served as a Sergeant and Data Network Specialist with the U.S. Marine Corps during Operation Iraqi Freedom, serving two tours from September through October in 2006 and March through October in 2007. He retired from the Marine Corps on August 31, 2011. Michael was a graduate of Donegal High School, class of 2003 and earned his Associates Degree from Penn State Harrisburg. He later obtained his Bachelor's Degree in Business with Bellevue University of Omaha Nebraska online while serving in Iraq. Taking classes at night after being out on Patrol during the day earned him the nickname "College Boy" from his fellow Marines. He was a member of the American Legion Walter S. Ebersole Post 185, and a Lifetime member of the V.F.W. Post 5257 both of Mount Joy. Michael was a serious movie buff, a 49ers fan, and a Hershey Bears fan. He enjoyed computers, his 3 cats Milo, Quinn and Calvin. He especially loved his 2005 Nissan 350Z Roadster. He also enjoyed hunting with his step-grandparents Bill and Judy Baker of Mount Joy. Surviving in addition to his father is a sister Heidi wife of Steve Campbell of Mount Joy; paternal grandparents Bernie and Glennis Conant of Turner, ME; maternal grandmother Naomi Irvin of Mount Joy; and a stepfather Scott Baker of Mount Joy. His Nephews Landon & Garret Campbell, Niece Savannah Campbell will all dearly miss their Uncle Mike. In addition to his mother he was preceded in death by a maternal grandfather Ellsworth Irvin who died in 2001. Relatives and friends are respectfully invited to attend his funeral service at the Heilig Funeral Home, 21 W. Main St. Mount Joy, PA on Wednesday February 8, 2012 at 11 A.M. Interment with military honors will be in Laurel Hill Memorial Gardens, Columbia. There will be a time of visitation with the family at the funeral home on Tuesday evening from 6:00 " 8:00 P.M. and again on Wednesday from 10:00 A.M. until the time for the service. If desired contributions in Michael's Memory may be sent to The Wounded Warrior Project, 1120 G Street NW, suite 700, Washington, DC 20005.
To order memorial trees or send flowers to the family in memory of Sgt. Michael Anthony Conant, please visit our flower store.