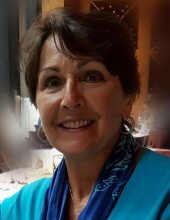 Sara Uibel Brubaker, 62, of Lancaster, and formerly of Penryn, died peacefully surrounded by her family on Saturday, January 27, 2018 at Hospice and Community Care, Mount Joy. Born in Lancaster, she was the daughter of Jack and Floy Eshleman Uibel of Penryn, and the mother of David T. Feldmann, husband of Samantha Rose of Pittsburgh, and Matthew M. Mangus of Lancaster. She was the wife of the late Paul Brubaker who died in 2012. She received a Bachelor’s Degree in Music Education from Gettysburg College, where she was a member of the Gettysburg College Choir, and later earned a Master’s Degree in Education from Eastern Mennonite University. For over 25 years, Sara served the Manheim Central School District as a classroom music teacher and choral director for grades K-12, bringing the gift of music to children of all ages. In 2007 Manheim Central named her Teacher of the Year, and in 2016 Lancaster-Lebanon Music Educators’ Association honored her for her dedication and service. Sara passionately believed in the power of music to celebrate diversity in our community and transform lives. She was an active member of the Manheim Central Education Association and the Pennsylvania State Education Association. A member of Otterbein United Methodist Church, Lancaster, she directed the Choir and Handbell Choir. Previously she was the Choral and Handbell Choir Director for Grandview United Methodist Church, Lancaster. She sang with many professional organizations, including the Ephrata Cloister Chorus and Musica Sacra. Sara had an adventurous spirit and loved travel, the ocean, and stargazing. She was an accomplished seamstress and artist and enjoyed spending time in her flower garden, which she loved. Sara was proud to have been an integral part of cancer research at Penn Medicine, Philadelphia, to further the quest to cure brain cancer. Her courage persists as a pillar of hope for future patients.

Surviving in addition to her parents, Jack and Floy, and two sons, David and Matthew, are three sisters: Sylvia, wife of Howard Sugarman of Syosset, NY; Ruth, wife of Rob Iosue of Manheim; Jacqueline, wife of Glenn Bartsch of Penryn; and many nieces and nephews.

Relatives and friends are respectfully invited to attend Sara’s service of Remembrance and Thanksgiving at St. Paul Evangelical Lutheran Church, 1258 Newport Road, Penryn, on Saturday, February 10, 2018 at 11:00 AM. Friends may visit with the family in the church on Saturday morning from 10:30 AM until the time of the service. Interment will be private in the adjoining church cemetery. Those desiring may send contributions in Sara’s memory to: The Sara Uibel Brubaker Music Scholarship Fund C/O Manheim Central School District, 281 White Oak Rd., Manheim, PA 17545.
To order memorial trees or send flowers to the family in memory of Sara U. Brubaker, please visit our flower store.

Service of Remembrance and Thanksgiving