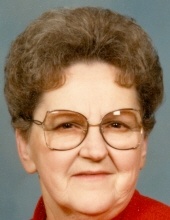 
Sara Jane (Janie) Kreider, 86, formerly of Mount Joy, died Sunday, April 27, 2014 at Brethren Village, Lancaster. She was the wife of the late Lester S. Kreider who died in 2004. Born in Penn Twp., she was the daughter of the late Roy H. and Sarah (Miller) Nye.

Janie and her late husband were the owners of Janie’s Restaurant in Columbia from 1976-1984. Janie also worked as a cafeteria worker for the Donegal School District at the Grandview Elementary School from 1984 until she retired in 1998. She was a faithful 66 year member of West Green Tree Church of the Brethren, Elizabethtown, where she was a custodian for 10 years.

Relatives and friends are respectfully invited to attend her Life Celebration service at the West Green Tree Church of the Brethren, 740 Green Tree Road, Elizabethtown, PA on Saturday, May 3, 2014 at 10:00 AM. Interment will be private. There will be a time of visitation with the family at the church on Saturday from 9:00 AM until the time of the service. In lieu of flowers, contributions in Janie’s memory may be sent to Hospice and Community Care, P.O. Box 4125, Lancaster PA 17604-4125.

To order memorial trees or send flowers to the family in memory of Sara Jane Kreider, please visit our flower store.