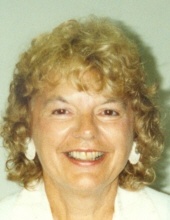 Sally L. Stark, 82, of Manheim, died peacefully on Saturday, January 9, 2016 at her residence. Born in Manheim, she was the daughter of the late Roy and Helen (Shelly) Hershey. She was the wife of the late Richard L. Stark. Sally had the privilege of working with two of the finest men she knew at Royer/Turner Buick of Harrisburg, where she was a treasurer/office manager before retiring after 25 years of service. Sally was a graduate of the former Manheim High School, and in her earlier years attended All Saints Episcopal Church in Hershey. Sally’s hobbies included golfing, curling, and bridge club.

Relatives and friends are respectfully invited to attend her funeral service at Buch Funeral Home, 21 Market Square, Manheim, on Tuesday January 12, 2016 at 11:00 AM. Interment will be in Manheim Fairview Cemetery. There will be a time of visitation with the family on Tuesday at the funeral home from 10:30 AM until the time of the service. If desired contributions in Sally’s memory may be sent to Bethesda Mission, 611 Reily St. Harrisburg PA 17102.
To order memorial trees or send flowers to the family in memory of Sally L. Stark, please visit our flower store.