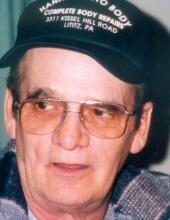 Ronnie Lee Hanna, 70, formerly of Manheim, died on Wednesday, February 25, 2015 at his home in Muncy Valley. Born in Florence, S.C., he was the son of the late Bernieth and Frances Pervis Hanna. An auto mechanic throughout his life, Ronnie was the owner and operator of Hanna’s Auto Body in Lititz. Previously he was employed by Howmet Aluminum, Lancaster, and Mercedes-Benz of Lancaster. After retiring from his auto body business in Lititz, Ronnie moved to Sullivan County where he made many friends. A veteran, he served in the U.S. Navy during the Vietnam War. Ronnie was a member of the Sonestown American Legion in Muncy Valley, and the Germania Band Club, Manheim. Ronnie loved the outdoors and enjoyed hunting and fishing and spending time at his cabin in Sullivan County. He was known for his talent for being able to fix anything as well as being quite the jokester around family and friends.

Relatives and friends are respectfully invited to attend Ronnie’s funeral service at the Buch Funeral Home, 21 Market Square, Manheim, PA., on Monday, March 2, 2015 at 8:30 AM. Friends may visit with the family at the funeral home on Monday morning from 8:00 AM till the time of the service. Interment will be in Indiantown Gap National Cemetery. Contributions may be sent in Ronnie’s memory to: Sonestown American Legion, 1433 Champion Hill Road, Muncy Valley, PA 17758 or Wounded Warrior Project, P. O. Box 758517, Topeka, Kansas 66675.
To order memorial trees or send flowers to the family in memory of Ronnie Lee Hanna, please visit our flower store.