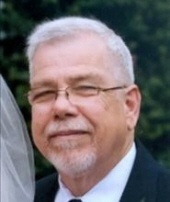 Ronald L. "Ron" Sangrey, 65, of East Petersburg passed away peacefully on Wednesday, October 12, 2011 at the Essa Flory Hospice Center, Lancaster after a courageous battle with cancer. Born in Lancaster, he was the son of the late B. Frank and Esther Stauffer Sangrey. He was the loving husband of Carol L. Beecher Sangrey and they would have celebrated their 34th wedding anniversary in December of this year. Ron retired from Ephrata Manor Retirement Home after eighteen years with the maintenance department; previously he worked twenty five years at the former Trojan Yacht Company, Lancaster. He was a member of Holy Trinity Evangelical Lutheran Church, Lancaster. A sports enthusiast, he enjoyed watching the Lancaster Barnstormers, Philadelphia Eagles and Phillies. Ron also enjoyed boats, antique cars and he loved to spend time with his family. Surviving in addition to his wife are three children, Todd L. Sangrey of Millersville, Krista L. wife of Eric Tittel of Lancaster, Justin L. husband of Katye Sangrey of York; two grandsons, Jordan and Gavin Sangrey, a brother, Kenneth F. husband of Sally Sangrey and a sister, Dolores Mumma both of Lancaster. He was preceded in death by a son, Ryan L. Sangrey. Relatives and friends are respectfully invited to attend his funeral service at the Buch Funeral Home, 21 Market Square, Manheim on Monday, October 17, 2011 at 10:30 AM. Interment is in Hempfield Church of the Brethren Cemetery, East Hempfield Township. There will be a public viewing at the funeral home on Monday morning from 9:30 AM until the time of service. Please omit flowers. Those desiring may send contributions in Ron's memory to Hospice of Lancaster County, P.O. Box 4125, Lancaster, PA 17604-4125.
To order memorial trees or send flowers to the family in memory of Ronald L. Sangrey, please visit our flower store.