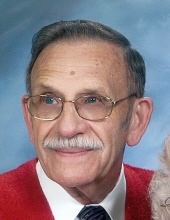 Robert W. “Bob” Evans, 87, formerly of Hart Street, Manheim, and a resident of Audubon Villa, Lititz, for over three years, died peacefully on Monday, January 12, 2015 at the Heart of Lancaster Regional Medical Center, Lititz. Born in Mount Carmel, he was the son of the late Calvin and Viola Hoffa Evans. Robert was the loving husband of the late Mary F. Yocum Evans who died in October of 2011. They were married for 62 years. Every day for over 37 years he rode his bicycle from his home to work where he was employed as a machinist for the Fuller Company, Manheim. Robert served in the U.S. Army Air Force during World War II. He was a faithful and active member for more than fifty years at Salem United Methodist Church, Manheim, where he served as an usher, volunteered with outside grounds maintenance, and helped with the drive through live Nativity Scene. In his early years Robert volunteered as a Cub Scout Leader for the Manheim area pack. Robert and his wife Mary were dedicated Manheim Central Baron’s fans and attended many sporting events, especially wrestling faithfully throughout the years. Robert and Mary were awarded a lifetime fan appreciation award by the Manheim Central Community for their continued positive presence at sporting events. Robert had a life-long passion for his family and he loved participating in family activities.

Surviving is a daughter, Kay L. wife of Marlin J. Alleman of Manheim, and a son, Mark R. husband of Marcia Blanck Evans of Lititz. Preceding him in death are two sisters: Janet Wetzel, Lois Adams, and two brothers: Glenn and Walter Evans.

The family would like to thank all the staff at Heart of Lancaster Regional Medical Center, Lititz, for their compassionate and loving care they provided for Robert during the time he was there.
Relatives and friends are respectfully invited to attend Robert’s funeral service at the Salem United Methodist Church, 140 North Penn Street, Manheim, Saturday, January 17, 2015 at 11:00 AM. There will be a viewing at the church on Saturday morning from 10:00 AM until the time of the service. Everyone is invited to meet at the Buch Funeral Home, 21 Market Square, Manheim, on Tuesday, January 20, 2015 at 11:15 AM to leave in procession promptly at 11:30 AM to Indiantown Gap National Cemetery, Annville, for a 12:30 PM interment service.

Those desiring may send contributions in Robert’s memory to the Arthritis Foundation, 3544 North Progress Ave., Suite 201, Harrisburg, PA 17110.
To order memorial trees or send flowers to the family in memory of Robert W. "Bob" Evans, please visit our flower store.