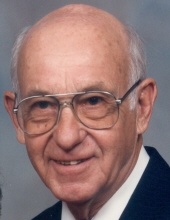 Richard M. Stoner, 97, of Manheim, died peacefully on Saturday, November 22, 2014. Born in Manheim, he was the son of the late William M. and Sadie Breitegam Stoner. Richard was the loving husband of Pauline L. Sturgis Stoner and they observed their 72nd wedding anniversary in June of this year. During World War II Richard sought alternative service by volunteering for Brethren Service. For 46 years Richard worked in the foundry production control department for the Fuller Company, Manheim, retiring in 1982. He was a member of St. Paul’s United Church of Christ, Manheim; previously, he was an active and faithful member of over 55 years of Salem United Methodist Church, Manheim. While at Salem United Methodist Church he served on the Administrative Board, was church historian, Sunday school teacher, and sang in the choir. Throughout his life Richard was an active and faithful volunteer in his community for the Manheim Veterans Memorial Ambulance Association, Meals on Wheels for the Manheim area, Librarian for the Manheim Historical Society, Boy Scouts of America, and assisted at the Manheim Community Library for 25 years. In 1998 Richard received the Service to Mankind Award from the Manheim Sertoma Club for his volunteer work. Over the years Richard and his wife Pauline also participated in many mission trips to Farmington, New Mexico to help the Navajo Nation with their ministry. Richard had a true passion for the outdoors; he hiked the Grand Canyon, biked through Germany, camped, and photographed nature where ever he traveled. He loved to listen to classical music.

Surviving in addition to his wife Pauline, is a son, Geoffrey M. husband of Sharyn Simmons Stoner, a daughter, Karen L. wife of Peter D. Weiss all of Manheim, 6 grandchildren, 11 great grandchildren, a brother, Earl M. Stoner of Lititz, and a sister, Mary E. Bailey of Lebanon.

Relatives and friends are respectfully invited to attend Richard’s funeral service at the Buch Funeral Home, 21 Market Square, Manheim, on Wednesday, November 26, 2014 at 10:30 AM. There will be a viewing at the funeral home on Tuesday evening from 6:30 PM to 8:00 PM with additional viewing on Wednesday morning from 9:30 AM until the time of the service. Interment will be in Manheim Fairview Cemetery, Penn Township. Please omit flowers. Contributions may be sent in Richard’s memory to St. Paul’s United Church of Christ Endowment Fund, P. O. Box 129, Manheim, PA 17545 or Navajo Ministries, P. O. Box 1230, Farmington, NM 87499.
To order memorial trees or send flowers to the family in memory of Richard M. Stoner, please visit our flower store.