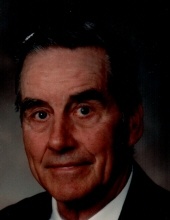 Richard G. “Dick” Buckwalter, 92, of Lititz, and formerly of Manor Township, went home to be with the Lord on Wednesday, July 5, 2017 at the United Zion Retirement Community. Born in East Lampeter Township, on July 29, 1924, he was the son of the late John H. and Gertrude Groff Buckwalter, and the step son of the late Mary Lefever Buckwalter. Richard was the loving husband of Margaret E. “Peggy” Hess Buckwalter and they would have observed their 70th wedding anniversary on July 19th. For many years Richard owned and operated the family farm in Manor Township which has now been part of the family for several generations. He was also employed by New Holland Machine Company and Musser's Potato Chip Company. Richard was a faithful member of Millersville Mennonite Church. He loved the hymns of the church and read his Bible through many times during his life. Richard enjoyed the outdoors, especially working in the garden, taking care of his lawn, and helping with the upkeep of the farm after his retirement. He loved his family, and treasured the times spent with his children, grandchildren and great-grandchildren.

Relatives and friends are respectfully invited to attend Richard’s memorial service at the Millersville Mennonite Church, 437 Manor Avenue, Millersville on Thursday, July 13, 2017 at 11:00 AM. Friends may visit with the family at the church on Thursday morning from 10:00 AM until the time of the service. Interment will be private in the adjoining church cemetery. In lieu of flowers contributions may be sent in Richard’s memory to: United Zion Retirement Community Caring Fund, 722 Furnace Hills Pike, Lititz, PA 17543, or Water Street Mission, 210 South Prince Street, P. O. Box 7267, Lancaster, PA 17604-7267.
To order memorial trees or send flowers to the family in memory of Richard G. "Dick" Buckwalter, please visit our flower store.