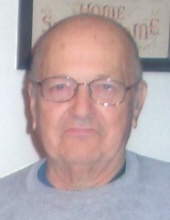 Richard B. Frey, 87, formerly of New Street, Lititz passed away on Sunday, December 4, 2016 at the Ephrata Community Hospital. Born in Manheim, he was the son of the late Anna Boyer Flory and stepfather, Herman K. Flory. He was the loving husband of Gladys M. Shenk Frey and they would have celebrated their 68th wedding anniversary this month. Retired in 1992, Richard worked 45 years at the former Raymark Industries, Manheim. He was very active with the Warwick Little League Baseball as a coach and caretaker of the ballfields for over twenty years. Richard enjoyed model railroads and collecting stamps and coins. He was also a St. Louis Cardinal Baseball fan.
Surviving in addition to his wife are six children, Ronald W. husband of Peg Frey of Manheim, Glenna A. Ford of Ephrata, Sherry L. wife of James Bowden of Lititz, Stan E. husband of Justine Frey of Lititz, Donna Frey of Ephrata, Dwayne E. husband of Tammy Frey of Ephrata; 14 grandchildren and 17 great grandchildren. He was preceded in death by a son-in-law, Randy Ford.
Funeral services will be private and at the convenience of the family. In lieu of flowers, those desiring may send contributions in Richard’s memory to Warwick Little League Baseball, P.O. Box 314, Lititz, PA 17543 or American Diabetes Association, 150 Monument Road, Suite 100, Bala Cynwyd, PA 19004.
To order memorial trees or send flowers to the family in memory of Richard B. Frey, please visit our flower store.