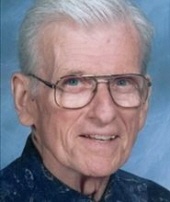 Ray C. Achey, 85 of Manheim died peacefully surrounded by his family on Saturday, January 28, 2012 at Hospice of Lancaster County Mount Joy. Born in Rapho Township, he was the son of the late Harold W. and Edna V. Conrad Achey. For over 45 years Ray worked as a millwright at the former Raymark Industries Manheim. He was the loving husband of Jacqueline D. "Jackie" Irvin Achey and they observed their 60th wedding anniversary in August of last year. Ray was a U.S. Army veteran serving during World War II. He was a faithful member of Ruhl's United Methodist Church Manheim volunteering his time as financial secretary for 35 years, and participated on the church softball team. Ray also was active with the Recreational League softball teams in his early years and the Manheim Old Timers softball team. He enjoyed bowling for over 60 years and participated in the Raymark and Merchant Bowling Leagues. Ray was passionate about his family and enjoyed spending time with his children and grandchildren. Surviving in addition to his wife are two sons: Jeffrey D. husband of Judy Tarker Achey, Wayne M. husband of Suzanne M. Evans Achey all of Manheim, two daughters: Karen LaRae wife of James E. Schompert of Bloomsburg, Gail Susan wife of Charles E. Ruhl of Manheim, 11 grandchildren, 2 great granddaughters, 3 brothers: Theodore S. husband of Ruth Achey, Kenneth C. husband of Irene Achey all of Manheim, Russell F. husband of Barbara Achey of Florida, three sisters: Sara L. Henry, Doris wife of Arthur Brubaker, and Josephine wife of Richard Shelly all of Manheim. Preceding him in death are two sisters: Marian Shirk, and Anna M. Geib. Relatives and friends are respectfully invited to attend his funeral service at Ruhl's United Methodist Church 4810 Elizabethtown Road, Manheim on Friday, February 3, 2012 at 11:00 AM. Interment will be in the adjoining church cemetery. There will be a viewing at the Buch Funeral Home 21 Market Square, Manheim on Thursday evening from 7:00 PM to 8:00 PM with additional viewing at the church on Friday morning from 10:00 AM until the time of the service. Those desiring may send contributions in Ray's memory to Ruhl's United Methodist Church Mission Outreach Fund 4810 Elizabethtown Road, Manheim, PA 17545 or Hospice of Lancaster County P. O. Box 4125 Lancaster, PA 17604-4125.
To order memorial trees or send flowers to the family in memory of Ray C. Achey, please visit our flower store.