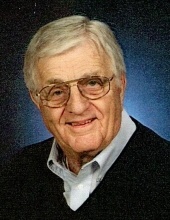 R. Donald “Don” Haverstick, 92, loving husband, adoring father, grandfather, great grandfather, and a great friend to countless others throughout a well-lived life, passed away peacefully on Sunday, January 9, 2022 at Hospice & Community Care, Mount Joy. He had resided at Luther Acres, Lititz, prior to that.
Don was preceded in death by his wife of 60 years, Norma (Landis), in 2011; his parents Roy and Ada Haverstick; his brother, Richard, and sister, Esther Weidler. He is survived by three daughters, Kay Hougendobler (Dave) of Willow Street; Becky Siebler (Craig) of Mechanicsburg; and Amy Selheimer (Scott) of Newark, Del.; grandsons Eric Pasquini (Jen) of Mechanicsburg and Kyle Selheimer (girlfriend Margaret Heffernan) of Wilmington, DE; and great grandson Miles Pasquini. He is also survived by his committed companion of eight years, Rose Marie Wyneken.
Born and raised in East Petersburg, “Sticks” attended East Hempfield High School and Elizabethtown College, where he earned his degree in liberal arts in 1951. While at Elizabethtown, he competed in soccer and was a standout player in basketball for the Blue Jays. He took great pride in being inducted into the East Hempfield High School Hall of Fame in 2015 along with his teammates from the Black Knight’s 1947 conference champion basketball team. Don was also a member of the Central Chapter of the Pennsylvania Sports Hall of Fame.
He began his career as an elementary school teacher at Bainbridge Elementary in 1951 and later taught history and civics at Elizabethtown High School for six years. While at E-Town, he coached the boys’ basketball team for several years. Following his teaching and coaching career, he worked as a salesman in the Eastern Pennsylvania district for Harcourt Brace Publishing from 1959-89 before retiring. An avid golfer, who was pretty good on most days despite never getting that elusive hole-in-one, he later worked 15 summers as a starter and marshal at Fairview Golf Course, Lebanon.
The family wishes to thank the staff at Luther Acres and Hospice for their loving care over Don’s final months and special thanks to Rose Marie, who provided such loving companionship over his final years.
A memorial service will be held at Luther Acres Community Room, 600 East Main Street, Lititz, PA 17543 on Monday, January 17, 2022 at 1:00 PM. There will be a time of visitation with the family immediately following the service. In lieu of flowers, donations can be made to the Luther Acres Caring Fund, Philanthropy Office, 600 East Main Street, Lititz, PA 17543-2224 or Lancaster Hospice & Community Care, 685 Good Drive, PO Box 4125, Lancaster, PA. 17604-4125.
To order memorial trees or send flowers to the family in memory of R. Donald "Don" Haverstick, please visit our flower store.