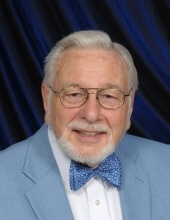 Philip E. Norris, 92, of Lititz, died peacefully on Monday, May 2, 2022 at Brethren Village. Born in Sweden, he was the son of the late Reverend Glen E. and Lois Detweiler Norris who were serving as missionaries for the Church of the Brethren.

Phil spent the first 10 years in public education in Altoona, then moving to Ambler to finish high school. Between his junior and senior years in high school, he was a “sea-going cowboy”, accompanying a boatload of horses from Newport News, VA to Poland. Following two years of work at a factory in Ambler, Phil attended Juniata College, where he majored in Bible and Philosophy, followed by Bethany Theological Seminary in Chicago.

After serving two years as Assistant Pastor in Hagerstown, MD, he became pastor of the University Park Church of the Brethren, just outside Washington, DC and the Prince of Peace Church of the Brethren, Denver, CO. Following the death of his first wife, Thelma (Mowry) Norris, and marrying his second wife Carilyn (Krehbiel) Norris, PhD, he moved to Fort Collins, CO, where Carilyn taught at Colorado State University.

Phil was involved in the real estate business, including owning his own company, Norris Enterprises, Inc. In 1986 he was called to serve as pastor of the Lacey Community Church, Olympia, WA, until his retirement in 1996. Wherever Phil served, he was deeply involved with ecumenical organizations as well as denominational endeavors, both district and national, including being a Trustee of Bethany Theological Seminary.

Carilyn, Phil’s second wife died in 2002 and in 2003 Phil married Joan Fyock Norris and moved to Pennsylvania. He was a member of the Lititz Church of the Brethren where he taught Sunday school, occasionally led worship and sang in the choir.
Surviving in addition to his wife Joan, a daughter, Helen Marie (Charles) Cowen, of Wellington, CO, a son, Byron Norris of Denver, CO, two grandsons: Dustin (Lindsay) Norris of Auburn, AL, Cameron (Lindsay) Norris of Mount Joy, two great grandsons, three great granddaughters, two brothers: Donald Norris PhD, of Wayland, MA, Wilfred (Lona) Norris, PhD, Huntingdon, and numerous nieces and nephews. Preceding him in death in addition to his parents and his first two wives: is a son, Nathan Glen Norris, and a brother, Arthur Norris, MD.

Relatives and friends are respectfully invited to attend Phil’s memorial service at the Lititz Church of the Brethren, 300 West Orange Street, Lititz, on Saturday, July 9, 2022 at 11:00 AM. Friends may visit with the family on Saturday July 9, 2022 from 10:00 AM until the time of the service. Interment will be private in the Lititz Church of the Brethren Memorial Garden. In lieu of flowers, memorial contributions may be sent in Phil’s memory to: COBYS Family Services, 1417 Oregon Road, Leola, PA 17540.
To order memorial trees or send flowers to the family in memory of Philip E. Norris, please visit our flower store.