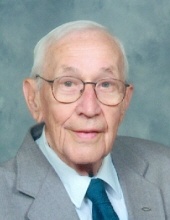 Paul B. Nauman, 96, of Manheim, died peacefully on Tuesday, May 31, 2016 at Pleasant View Retirement Community. Born in Rapho Township, he was the son of the late Romanus and Fannie Baker Nauman. Paul was the husband of the late Mabel Geib Nauman who died in December of 2004. In 1984 Paul retired as a plant supervisor for the former Manheim Belting Company, now Fenner Drives where he was employed for over 41 years. During World War II Paul served as a sergeant with the U.S. Army Medical Corps. Following his service time he volunteered for the American Red Cross as a trainer in First Aid. Paul was an active, faithful, and oldest living member of East Fairview Church of the Brethren. He was a member of the Mount Joy American Legion. Paul enjoyed hunting, fishing, and gardening and was a member of the Safety First Hunting Camp.

Relatives and friends are respectfully invited to attend Paul’s memorial service at the East Fairview Church of the Brethren, 1187 Fairview Road, Manheim, on Saturday, June 4, 2016 at 11:00 AM. Friends may visit with the family at the church on Saturday morning from 10:00 AM until the time of the service. Interment will be private in the adjoining church cemetery. In lieu of flowers contributions may be sent in Paul’s memory to the East Fairview Church of the Brethren Memorial Fund, 1187 Fairview Road, Manheim, PA 17545.
To order memorial trees or send flowers to the family in memory of Paul B. Nauman, please visit our flower store.