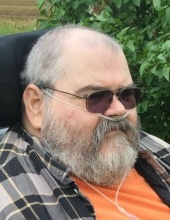 Patrick Richard “Pat” Buggy, 59, of Manheim, died peacefully surrounded by friends and family, after a brief illness, Friday, July 1, 2016 at Lancaster General Hospital. “Pat” as he was affectionately known, was the husband of Katie (Stoltzfus) Buggy and they celebrated their 26th wedding anniversary this past February. Born In Indiana, PA he was the son of the late Francis and Nelda (Solinski) Buggy. Pat was a butcher at Baum’s Bologna in Elizabethtown, and also for the former Ezra Martin Co. of Lancaster and retired on disability from John F. Martin of Stevens. Pat was a graduate of Elizabethtown High School, class of 1975. His interest included hunting, fishing, model airplanes, cooking, taking care of his bee hive, and watching TV and playing video games. Everyone enjoyed his great sense of humor. Pat was known as “Georgie” by his 2 best friends Billy & Barley.

Surviving in addition to his wife Katie is a daughter Nelda at home, and a brother Michael Buggy of Columbia, and his 4-legged companion Rexx.

Relatives and friends are respectfully invited to attend his Life Celebration Service, at the Buch Funeral Home, 21 Market Square, Manheim on Tuesday July 12, 2016 at 7:00 PM. There will be a time of visitation with the family from 6:00 PM until the time of the service. Those attending the service for Pat are encouraged to dress casual and wear the color blue.

Interment will be private.
To order memorial trees or send flowers to the family in memory of Patrick Richard "Pat" Buggy, please visit our flower store.