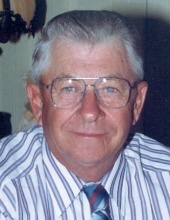 
Norman B. Geib, 88, of Manheim, went home to be with the Lord on Tuesday, March 4, 2014 at the Pleasant View Retirement Community. Born in Manheim, he was the son of the late, Norman and Ella Fahnestock Geib. Norm was the owner of a farm in Rapho Township for many years. He was the husband of the late, Ruth Witman Geib who died in March of 1990. Norm was a member of the White Oak Church of the Brethren, Manheim. Norm had a humble and generous spirit; he gave sweet corn and cantaloupes from his farm to area retirement homes for many years. He won the Lancaster County Conservation Farm Award. The family farm was photographed after Norm devised a planting pattern with his crops that depicted the statement: “Thank You Lord For Everything “. This photo was used for a Hallmark Puzzle which was distributed nationally. Norm had an engaging personality and loved people of all ages. He was known locally for playing Santa Claus in his drivable sled in the Manheim community during the Christmas Season.

Surviving is a daughter-in-law, Donna Miller Geib of Manheim, three sisters: Jane wife of Carl Longenecker of Lititz, Reba wife of Earl Groff of Manheim, Nancy Diffenderfer of Manheim and many nieces and nephews. Preceding him in death is a son, Mark W. Geib, two brothers: Amos and Abe Geib and a sister, Mary Peters.

Relatives and friends are respectfully invited to attend his funeral service at the Hoffer Auditorium at Pleasant View Retirement Community, 544 North Penryn Road, Manheim, on Saturday, March 8, 2014 at 3:00 PM. Interment will be in Graybill’s Brethren Cemetery Elm. There will be a viewing on Saturday afternoon at the Hoffer Auditorium from 2:00 PM until the time of the service.

To order memorial trees or send flowers to the family in memory of Norman B. Geib, please visit our flower store.