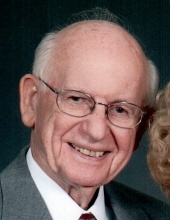 Morris Hollinger Greiner, passed away on Sunday, September 17, 2017 at the age of 93. Born in Mt. Gretna, he was the son of the late Morris Sharp and Kathryn Hollinger Greiner. He was the loving husband of Pauline Becker Greiner for 33 years. His first wife was the late Doris Heagy Greiner Kauffman.
Morris served in World War II in the European Theater, for the U.S. Army Signal Corps Supreme Headquarters Allied Expeditionary Force Division as a communications systems support technician. Following the war, Morris worked as an electrician technician for 35 years for the former RCA Corporation, Lancaster. In 1950, he received a Bachelor’s Degree in Television Engineering from American Television in Chicago, ILL.
He was an active and faithful member of Trinity Evangelical Lutheran Church of Colebrook where he was a member of the choir, and served as treasurer. Morris was a notable Mt. Gretna historian. He enjoyed collecting Mt. Gretna memorabilia and was a member of the Lancaster Post Card Club. He was an avid bowler, and also enjoyed hiking, photography, and polka dancing with his wife.
Surviving in addition to his wife Pauline, are three sons: Jim husband of Peg Greiner of Lititz, Jeff husband of Barbara Greiner, Joel husband of Susan Greiner all of Lancaster, a daughter, Beth wife of Peter Jupin of Lancaster, ten grandchildren, and six great grandchildren. Preceding him in death is a granddaughter, Emily Jupin, and a sister, Elmira Leibig.
Relatives and friends are respectfully invited to attend Morris’s funeral service at the Trinity Evangelical Lutheran Church of Colebrook, 58 Church Road, Manheim, on Tuesday, September 26, 2017 at 11:00 AM. There will be a viewing at the Buch Funeral Home, 21 Market Square, Manheim, on Monday evening from 6:30 PM to 8:00 PM with additional viewing time at the church on Tuesday morning from 10:00 AM until the time of the service. Interment will be in the adjoining church cemetery. Those desiring may send contributions in Morris’s memory to Trinity Evangelical Lutheran Church of Colebrook.
To order memorial trees or send flowers to the family in memory of Morris H. Greiner, please visit our flower store.