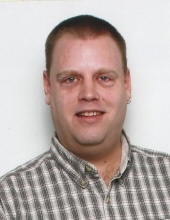 Matthew S. Reidenbach, 40, of Manheim, died unexpectedly and went to meet with his Lord on Sunday, June 9, 2013 as a result of an automobile accident in York County. Born in Lancaster, he was the son of Ronald R. Reidenbach husband of Deborah Reidenbach of Lancaster and Virginia Rittenhouse Smith wife of Philip Smith of Mountville. Matt was the loving husband of Delight M. Tressler Reidenbach and they observed their 12th wedding anniversary in January of this year. Matt was a stay at home dad and introduced his children to his love of classic rock music. He was an avid Philadelphia Eagles fan and his favorite player was Donovan McNabb. Matt attended Manheim Central High School and the School District of Lancaster.

Relatives and friends are respectfully invited to attend his funeral service at the Buch Funeral Home, 21 Market Square, Manheim, on Thursday, June 13, 2013 at 7:30 PM. There will be a public viewing at the funeral home on Thursday evening from 6:00 PM until the time of the service. Interment will be private and at the convenience of the family in Millersville Mennonite Cemetery. Those desiring may send contributions in Matt’s memory to the Humane League of Lancaster County, 2195 Lincoln Highway East, Lancaster, PA 17602.

To order memorial trees or send flowers to the family in memory of Matthew S. Reidenbach, please visit our flower store.