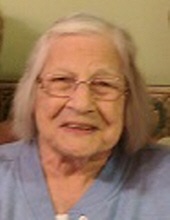 Mary J. Gorton, 86, of Lititz, died peacefully on Monday, September 11, 2017 in Strasburg. Born in Conestoga, she was the daughter of the late Murvan and Naomi Tressler Ressel. Mary was the loving wife of the late Richard M. Gorton who died in May of 1993. Mary worked at the former Chimney Corner Restaurant, Lititz; previously she worked many years at Woodstream Corporation, Lititz. Her interests included Bingo and card games.

Relatives and friends are respectfully invited to attend Mary’s memorial service in the Steinman Hall at the Moravian Manor Retirement Community, 300 West Lemon Street, Lititz, on Monday, September 18, 2017 at 11:00 AM. Friends may visit with the family in Steinman Hall on Monday morning from 10:00 AM until the time of the service. Interment will be private in Indiantown Gap National Cemetery, Annville.

In lieu of flowers contributions may be sent in Mary’s memory to: Hospice and Community Care, P. O. Box 4125, Lancaster, PA 17604-4125.
To order memorial trees or send flowers to the family in memory of Mary J. Gorton, please visit our flower store.