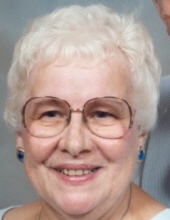 
Mabel L. Hostetter, of Brethren Village, Lancaster, formerly of Manheim, died Saturday, July 27, 2013 from complications associated with Alzheimer’s disease. Born in Elizabethtown, on October 21, 1922, Mabel was the daughter of the late Martin W. and Anna M. (Boltz) Barley, and the wife of James M. Hostetter, who preceded her in death in 2003. Jim and Mabel were proprietors of Hostetter’s Flower and Gift Shop from 1956 to 1984 and members of Salem United Methodist Church in Manheim.

Mabel loved arranging flowers, traveling, spending time with her husband and family, socializing and serving in the Manheim community, where she spent most of her married life. She was a charter member and past president of the Manheim Lioness Club, active in the VFW Women’s Auxiliary, the Manheim Women’s Club, American Business Women’s Association, Meals on Wheels, and the Manheim Chamber of Commerce Women Engaged in Business. Jim and Mabel participated in Lancaster County’s Senior Citizens House Sitters and continued to do volunteer work after moving to Brethren Village.

Relatives and friends are respectfully invited to attend her funeral service at the Brethren Village Chapel, 3001 Lititz Pike, Lancaster on Tuesday, July 30, 2013 at 11:00 AM. Interment will be in Manheim Fairview Cemetery, Penn Township. There will be a viewing on Monday evening from 7:00 PM to 8:00 PM at the Buch Funeral Home, 21 Market Square, Manheim. There will be an additional viewing one hour prior to the service on Tuesday morning at the Chapel. In lieu of flowers, contributions in Mabel’s memory may be sent to the Brethren Village Good Samaritan Fund, 3001 Lititz Pike, P. O. Box 5093, Lancaster, PA, 17606.

To order memorial trees or send flowers to the family in memory of Mabel L. Hostetter, please visit our flower store.