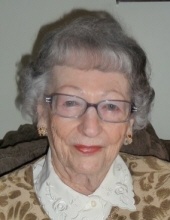 Lucille Y. Myers Willwerth, 92, of Garden Spot Village, New Holland, and formerly of Terre Hill, died peacefully on Monday, November 4, 2013 at Hospice & Community Care, Mount Joy. Born in Terre Hill, she was the daughter of the late Elwood B. and Gwendolen Clime Redcay. Lucille was the loving wife of the late John H. Willwerth, who died in 2000, and the late Richard Todd Myers, who died in 1990. For 25 years she worked as a secretary at Terre Hill Manufacturing in Blue Ball, retiring in 1979. She was a lifelong member of St. Paul’s United Methodist Church, Terre Hill, where she taught Sunday School for over 25 years, sang in the choir, and was active in the Missionary Society. She was also a member of the Golden Years Club at the Ephrata Recreational Center. Lucille enjoyed making crafts and quilting.

Relatives and friends are respectfully invited to attend her funeral service at Garden Spot Village Chapel, 433 South Kinzer Avenue, New Holland, on Tuesday, November 12, 2013 at 11:00 am. Interment will be in Terre Hill Cemetery. There will be a viewing at the Chapel on Tuesday morning from 10:00 AM until the time of service.

In lieu of flowers contributions may be sent in Lucille’s memory to American Cancer Society, 314 Good Drive Lancaster PA 17603.

To order memorial trees or send flowers to the family in memory of Lucille Y. Myers Willwerth, please visit our flower store.